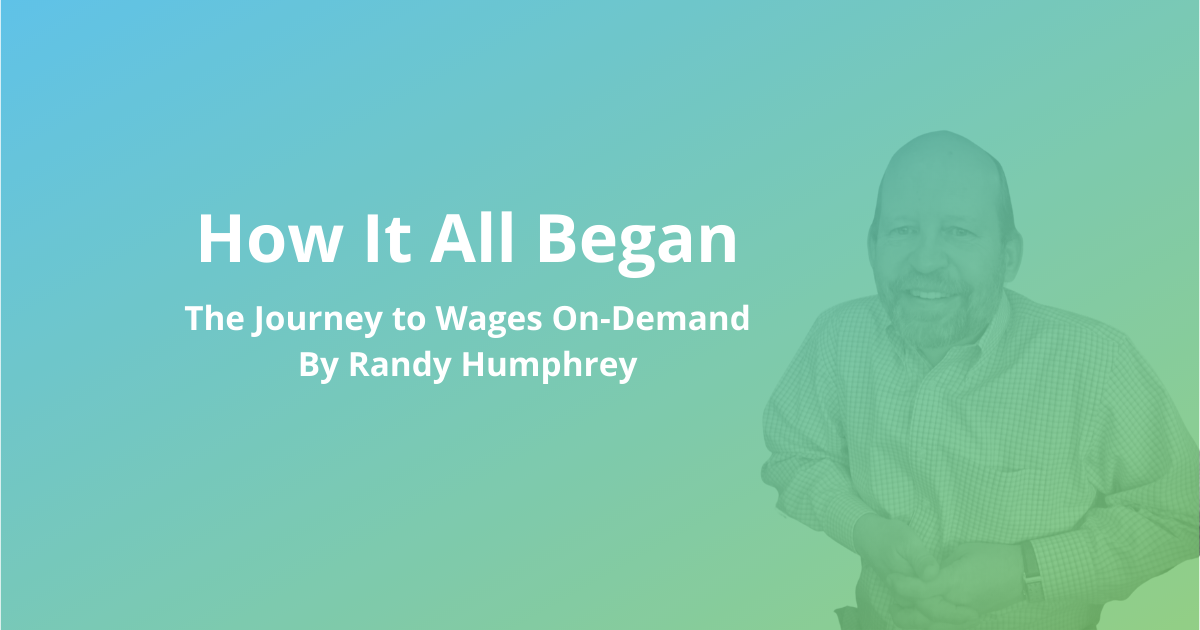 How It All Began: Randy's Story - with Randy Humphrey

How It All Began: Randy's Story - with Randy Humphrey

Recently, ZayZoon Sales Consultant, Randy Humphrey took some time to write about his personal experience at ZayZoon. In this piece, Randy gives great insight into his life before ZayZoon, the early days of the company, and how his experiences helped shaped the company you know today.

As times change and technology progresses, so does Wages On-Demand, the only constant being the desire to help people achieve Financial Wellness.

Randy's story is a testament to this.

How it all began..

18 years ago, I made a mistake. I was asked to be the CEO of a very small pay-day loan company, and I accepted.

I had been a stockbroker for many years, built a pretty good business, and out of boredom was looking for a new adventure. I had a mindset of “Heck, I know finance and payday loans are a financial service product, I should be able to figure this out.” Within just a couple of weeks I did figure something out; this is the most absurd business model in the world.

Good customers had to pay an exorbitant amount of fees just to cover the lenders inability to properly underwrite the loans. With poor underwriting and a bloated business model, the industry lobbied together to get permission to charge their customers criminal interest rates. Still, even with these egregious interest rates and antiquated store fronts my research brought me to learn there were still an astonishing number of loans being done each year in the US market (approximately 100 million).

It was at that moment when I realized there had to be a better way to help the everyday struggling American.

As I thought through this problem I came up with my idea. If we could create a filter to find the good customers (hard working folk, in need of short-term advances til payday) and weed out all of the “bad” customers (fraudsters, unemployed), we could offer a service to the employed – a true “payday” advance product, with a low loss rate and savings passed on to the clients. In theory, if you worked with employers, you could determine the qualified employees and give them the money they have already earned but weren’t yet paid for; it’d be beautiful!

But, how? This is where being the son of a family-owned small payroll company finally paid off! It was at this point where my should-have-been-a-lawyer-is-actually-a-genius son Shane, and I started to figure it out.

So, we dove into some research. Very quickly, we came to realize no one had thought of this before, or at least no one had done it and made it on Google – we were shocked. We quickly assembled a small team to see if this idea actually had any value.

Working with my father’s payroll service, we identified the perfect beta company, a shower door manufacturer with 170 employees. In conjunction with finding a place to try the idea, we also did the legal research and started the patent process. When we were ready to launch we put together some marketing materials and showed up at the employer’s factory, then we finally told everyone about the wonders of payroll advances as an alternative to payday loans.

It was only one advance, but you know, “gotta start somewhere”. It took a couple of weeks to get the second call, but we did and we were moving. Over a few months the volume really started to take off. Over the course of the next year we added a few employers and did approximately 1000 advances with every customer paying back! Of course, they did, it was just their pay early. Unlike payday loans which encumber people with debt, it’s no wonder they have high losses and high fees.

Now it was time for step 2, building the market.

The Success and the Roadblock..

The next 36 months consisted of many peaks and valleys; we learned a lot but had also faced many challenges. We identified the 4 pillars that needed to be built upon to make the product real:

1.) Sales; can we get the product sold and accepted in the market?

2.) Compliance; was the concept we were proposing legal?

3.) Technology; can we build a platform to execute the idea in a seamless way?

4.) Money; can we find and convince investors to invest in an unproven idea with a young, inexperienced team?

Sales: We had a fair amount of success signing small payroll companies and payroll platforms that paid more than 6 million US employees.

However, this was merely a first step in a long and extremely complex sales process. We would call it a success, but we really didn’t know what we didn’t know.

Compliance: In this area we had a great legal mind, my son and partner, Shane (someone I am quite proud of). Although the legal issues were complex, we worked through them and made many alterations from the original product to fit the guidelines of many states and the multitude of laws associated with this type of product. We ended with a solid product that was virtually legal in every state.

Technology: We had a few bumps along the road with partners that didn’t produce. On our side we were always undercapitalized and could never really build the proper platform that was needed. Keep in mind though, this was 2005 and moving money around on the internet although becoming popularized, was by no means popular and marketing to employees in rural Arizona required a more guerilla approach.

Money: This was my area of expertise, but we quickly found out I was no expert. We did manage to raise some funds but never the amount really needed to build the business properly. When advising startups with big dreams and new ideas, I always say the same thing - “Raise more than you need and take it when it’s there!”.

A few years in and many ups and downs later, we were introduced by a friend of a friend to a group in the same space. They seemed thrilled at the idea of having a real opportunity to disrupt the market with a new concept. Given the fact that we were out of money (again) and someone was willing to pay a reasonable price, we sold. Over the course of a few years they mothballed the idea and went back to preying on distressed consumers by overcharging for much needed loans.

Somewhere along the line, through persistence and extreme curiosity, I met Tate Hackert.

Tate was a college student at the time. After a LinkedIn connection request and a few emails, we started chatting on the phone. Tate was intrigued with the business and while doing his research was talking to everyone that would take his call to fully understand, and build on the idea of offering responsible financial products to underserved employees. Over a few years and a few phone calls, Tate would share the progression of turning his idea into a company.

With Tate’s tenacity and willingness to listen to many different views in order to make the best decisions, a new company was formed, and a team was built. The team that Tate built was solid and diverse.

The new company was called ZayZoon and launched in the Canadian market. ZayZoon avoided many mistakes that we made and executed the early stages wonderfully. They built a great platform and continued to improve it by making integrations easy and creating an incredible user experience. They were well-funded and have always had a well thought out financing plan. After almost a full year of finding indicators of success in Canada, ZayZoon decided to enter the United States. I was honored when Tate asked me to be part of the team and to help launch and build the US market.

Over the years, it has shifted quite a bit and I’m in awe to see the idea and company I had almost 2 decades ago take on another life, this time doing even better by our customers.

The acceptance and feedback from employees has been exhilarating and businesses are starting to understand the benefits this product provides to their staff.  With no debt, minimal fees and free products like financial education beyond Earned Wage Access, ZayZoon is solving a real big problem in a real good way.

That mistake I made 18 years ago, ended up being a pretty good decision.

Great ideas will always find the right place at the right time and ZayZoon has built, not just a great company, but a great culture. We now serve thousands of businesses and their staff, and in multiple countries. ZayZoon, under the thoughtful and visionary leadership of Darcy Tuer, Jamie Ha, Tate Hackert, and Kristen McGill, has built an incredible team of folks dedicated to helping you achieve financial wellness. The culture is that of an extremely caring organization, they show compassion towards their fellow workers and seem to always show up when the customer needs them.

In addition, ZayZoon has built a world class board of true professionals that clearly know how to build a great company. Although we have achieved much success and enjoy great execution of a great idea, any observer would be naïve to think that we are close to being where we want to be.

About The Author: Randy Humphrey 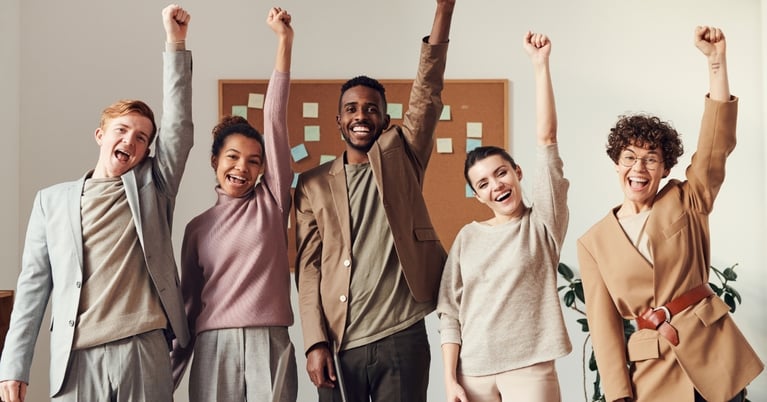 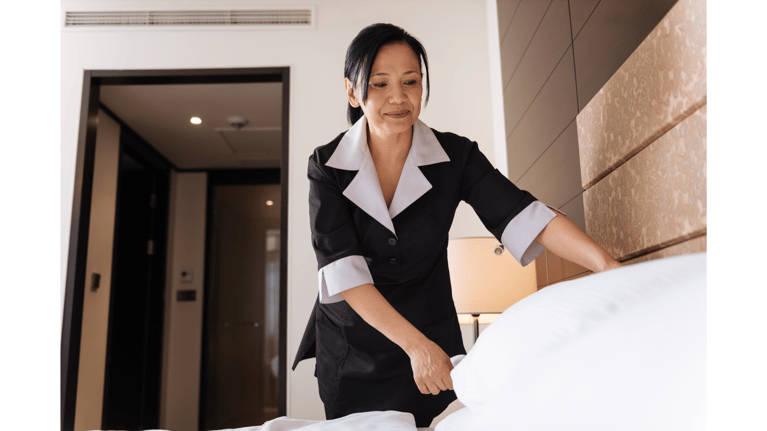 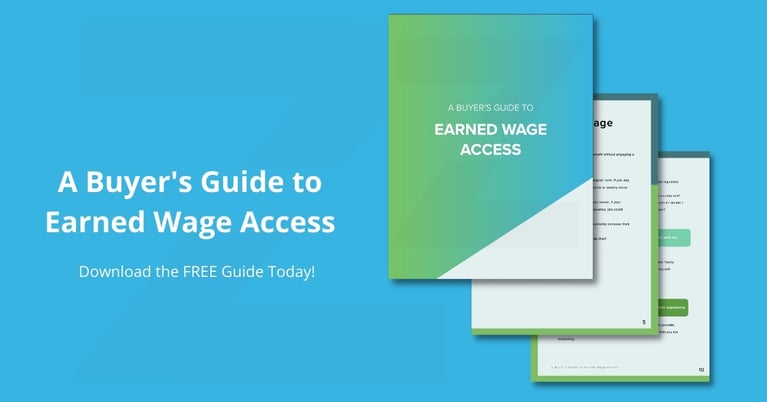